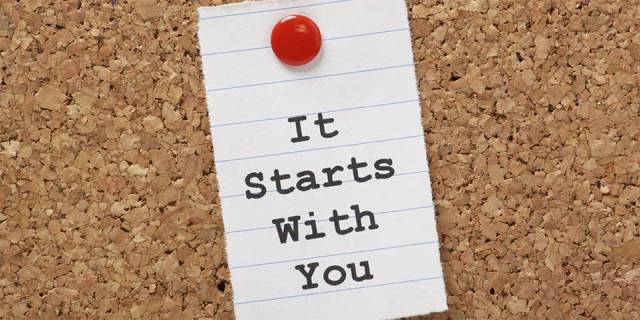 To some degree, we ALL want to reach some level of personal growth. Whether it is losing weight, making more money or simply becoming a better person, we all want to “grow” in SOME way, whether others agree with it or not. While it’s true that there are often factors we cannot control that hinder us, most of the time, WE are our own hinderance. Not everyone can be mature enough to take a good look at themselves in the mirror, so if you’re one of them who is NOT, keep it moving and “doing you,” whatever that means in your world. If you ARE mature enough to take a step back and look at yourself, read on.

Here is what I feel are some of the biggest reasons you are NOT seeing personal growth:

1. You can’t look at yourself in the mirror and acknowledge your own flaws. We all have them. Society has determined which are more “important” than others, but they exist in every one of us. People often feel a need to compare one flaw to another and the next thing you know, we’re bashing each other. Stop doing that. There is nothing out there that says one flaw is “better” or “worse” than another. Again, only society has determined that. The longer you spend your time pretending your flaws don’t exist, the more you slow yourself down. Even though flaws shouldn’t always be considered as a bad thing, the reason this hinders us is because those flaws are sometimes the very reason we cannot grow on a personal level. Think about a car with a bad engine. You can continue driving and pretending the engine is just fine, but all you will also do is constantly worry that the car will break down. Eventually, it will. Only when you can bring yourself to get under that hood will you begin taking the steps toward improving that car. Look under your personal “hood.”

2. You spend all your time on social media either reading or talking about everything that pisses you off. Some of you wake up in the morning and the first thing you do (I’m talking about before you even get up out of bed) is jump on Facebook and scroll through statuses until you come across one or two you don’t like. Forget all the ones where someone is wishing you a good day, praying for you, or saying “Good morning.” BOR-RING. You want drama. You come across that posted link or that news story and the topic upsets you every time and I mean EVERY TIME. So then you jump on and begin commenting. Someone comes along who doesn’t agree with you and…you know the rest. It’s either that, or you will scroll through statuses to find that person you don’t like to spy on them for a while, hoping for something to be going wrong with them and when it doesn’t, that ruins your day also. Here is my question: When you are driving in the morning to work and you run into traffic, do you ever turn off that road onto another road you KNOW has MORE traffic? Of course you wouldn’t. So why, when you’re already disgruntled about being up early in the morning, would you insist on going straight to that “worse” traffic? Why would you start your day on everyone and everything you don’t like? All that does is start your day off on the wrong foot. Then you’ll go to work and expect everyone to move out of your way or not to bother with you, right? Start your day with something positive. ANYTHING positive. It may not get you all the “likes” and attention you want, but I promise, you will feel better. I often post about going to the gym early in the morning and I MAY get four or five “likes.” Doesn’t matter. I still feel AMAZING in the morning. You still have to continue on with your day; start it off right.

3. Putting down others who are successful or attempting to minimize what they’ve done or are doing. Referring to the gym again, I’ve had friends who would post about the gym or other exercise, but then they would stop. At some point, I would find out that they stopped posting because they thought it bothered people. While that is that’s person’s right, it doesn’t make sense to me. Exercise is a wonderful thing and leaves you feeling GREAT at the end. So why shouldn’t people want to talk about that? Oh, right…because YOU don’t want to hear it? Look, everyone does not have to go to the gym or exercise. It is completely your right to do what you please. But stop putting down other people who go. All you’re doing is showing that you feel guilty because you know you need to exercise and aren’t doing it. Putting down someone else will make you feel better for a few minutes, but you will eventually have to see yourself and you’re right back where you started. If you don’t want to be at the gym or exercise, then there is no good reason to talk about others who go. None at all.

4. Preaching about how we shouldn’t judge others and barely five minutes later, you’re judging someone else, while trying to justify it. Have you ever seen or heard people talk about or even go as far as to take pictures of how people dress at Walmart or other similar places? (I say “similar places” because I’m not sure if Walmart is the only place in which this is done) I have friends who consider themselves as religious who do this. Yes, they preach about God and how we’re supposed to love one another, how they’re thankful for this and that, but then, they’re on Facebook yapping about how someone in Walmart is dressed. Now I won’t dispute that some people are quite, uh, let’s say, “creative” in their fashion sense, but it’s certainly not enough to get me to spend any amount of time talking about them, let alone taking pictures and then posting them. Let me guess…that’s not really “judging,” right? How is it not? So you find it okay to talk about how someone is dressed along with laughing at them about it? It doesn’t matter how they look or who else is laughing with you. The same judging that you say we aren’t supposed to be doing is exactly what you’re doing. EXACTLY WHAT YOU’RE DOING. It’s no different. Now that is a more complex example. Many of you are simpler than that. You will sit back and badmouth how someone looks, the fact that they’re overweight, their significant others, the car they drive, their personal lifestyles and who knows what else. Yet, someone say anything about you and all hell breaks loose. Some people like to sit back and call their judgments the “truth.” It’s not judging if it’s the “truth,” right? Funny that many of you can’t handle the “truth” about yourself. If you truly believe that we are not to judge others, then stop making excuses for doing the very same thing. Those of you who do that, at least from what I’ve noticed, are the same ones who get the most upset when someone does it to you. There might just be a reason for that.

5. Believing that money does not equal success. Who put you in charge of what equals success for other people? I’m not going to play stupid with this one. There are a LOT of people who are jealous of others who have money. Damn near everyone will deny it, but again…I’m not about to play stupid with this. The crazy thing is, it doesn’t even have to be a LOT of money. Simply having a little more than another person is enough. So in a pathetic attempt to cover up that jealousy, you find all kinds of ways to talk about how “unimportant” it is to have money. My favorite is the whole notion that “you can’t take it with you.” Can’t take it with you where, exactly? You mean when they die? So let me get this straight…you have to put someone in the grave in order to feel better about yourself? You’ve never seen a U-haul at a funeral procession, right? So, again…you’re so jealous of them having money that you have to “kill them off” to prove a point? What point is that, exactly?

Success is whatever the hell people want to call success. Some believe money is the measure of success and others don’t. That’s fine either way. But stop putting down people who have a little bit of money. You will really NOT make yourself feel better, no matter how many of your other friends agree with you. If it’s supposedly not important to you, that’s okay. But if another person wants to make their lives all about it, that is THEIR business. If it bothers you that much, move on. It’s always funny to me, because the same ones who claim money isn’t important are the same ones who would run out and play the lottery when it reaches nine figures. What makes that funny is that in THAT case, the money isn’t even really earned. Yet, you want to bash people who work hard and EARN their money. Makes a whole lot of sense.

Better yet, stop assuming that money is #1 in everyone’s life. It isn’t. It’s a shame that so many people truly believe this. We all know that actor and comedian Robin Williams committed suicide recently. The saddest thing to me about that, besides the obvious, is that so many people said, “He has all that money? Why would he commit suicide?” or “He’s probably running out of money.” I understand that when you don’t have it, it looks so much better. But to judge people who want to work toward earning a lot of money or hell, any money at all not only does NOT help you, but you make it more than clear that jealousy is what runs your life and not common sense. If money truly doesn’t matter to you, then the amount others have should not either.

Oh yes…and there’s more, but I’ll save those for another time. Stay tuned.