#Racism: A Problem WE ALL Need To Work On Fixing 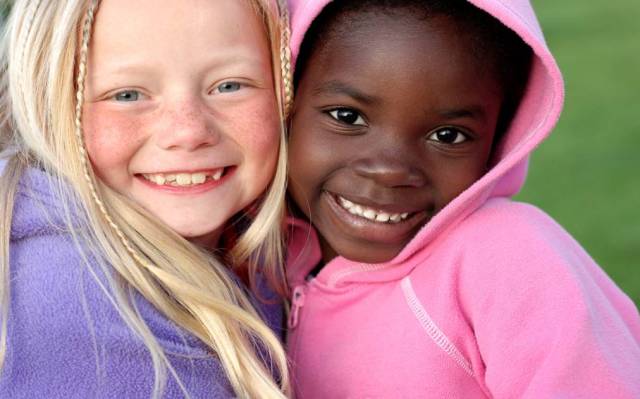 I chose this picture just as example of where kids are before adults get a hold of them. What I mean by that is, these are two little preschool girls. The only time that color matters to them is when there are crayons on the table. The only time race makes a difference is when they’re both trying to reach the finish line.

In other words, kids are not born racist. However, the sad thing is that either of these two girls or children like them, those who couldn’t care less about the color of someone’s skin, will eventually be taught that they are supposed to care…and NOT in a good way.

I won’t insult anyone’s intelligence here. The definition of racism is very simple. If you don’t know the definition, you’re on here anyway; look it up. Even if you do think you know; humor me. Find out specifically what it means, word for word.

A lot of people are not fully aware of the true meaning of racism or racist, and that is where a lot of the problem lies. The way I can tell this is that so many people out there react to situations as though they really don’t know.

For starters, way too many people believe that racism is a minority’s problem. It’s not. It’s everyone’s problem.

Now I’ve probably lost a lot of people on that one. After all, whenever pretty much any problem arises, it’s much easier to just jump on one side or another rather than to really LOOK at the problem and make an honest determination that way. I don’t mean to only pay attention to the facts that support your stance and then try and come up with some clever or semi-intelligent way to express it as though you’re being unbiased. Nope. I mean to NOT make any decision unless you have all the facts, even those that do not support the side you’re on.

I’ve heard some people say that to remain neutral demonstrates weakness. I call bullshit on that one. To me, the weak ones are those who don’t have the good sense to observe ALL the facts of a situation. Those who jump to one stance or another simply because that’s the status quo. That’s what normally happens or it’s what society is doing. What’s so “strong” about that? Those who have the bravery to say, “Well I do not know, and I’m not going to decide until I know for certain, even if means I remain neutral,” are the strong ones. Those who follow society…YOU are the weak ones.

As the title suggest, racism is NOT only minority’s problem. I see so much of that. Folks seem to think that racism can only happen to a minority. Nothing in the definition suggests that. If any part of it does, feel free to let me know. The sad thing is that too many people believe that, at least in this country, white people cannot be victims of racism. Racism is something where there is wrong on BOTH sides.

Yes. Wrong is on BOTH SIDES of the equation. To me, this is the reason race relations will never improve. As usual, each side simply points to the other and that’s where all the blame is placed. The name of game is blame.

WHITE FOLKS: Stop being so quick to dismiss everything as NOT being racism. While it’s true that some minorities do “cry wolf” when it comes to racial issues, I also see quite a few white people quick to dismiss every potential case of racism as “crying wolf” and that’s wrong. Even before knowing the facts, people come out with “Oh God…here they go again!” before having any clue as to the concern. Racism may not exist every single time there is an allegation of it, but you are adding to the problem by feeling that it is NOT a problem close to 100% of time. Any halfway intelligent person knows that racism is still out there. Trying to deny that is plain ridiculous.

BLACK FOLKS: Stop saying that every single time we don’t get our way, it’s considered as racism. It isn’t. A BIG problem in our community is that we blame SO MUCH on the fact that we’re black and we are our worst enemy when it comes to that. It’s just that simple. Again, the “crying wolf” syndrome will only lead others to not care when racism actually DOES happen, all because you’ve lied and/or misunderstood. And you can’t blame anyone, because you would feel the same way.

As for everyone, here’s another kicker: Racism is NOT a “one race against another” issue. That’s another thing people seem to misunderstand. There’s this thought that blacks cannot be racist toward other blacks and the same thing for white people. Once more, nothing in any definition implies that this is not true.

In my opinion, the biggest problem is that there are so many misunderstandings about racism and that’s a big reason the problem will always exist. However, I’m a very intelligent man. I understand that there are many out there, both black AND white, who are well-aware of the definition and either are in gross denial about it or simply don’t care. There’s little hope for them. However, again, my belief is that there are more who misunderstand or simply want to place blame on the other side and that’s where most of the problem lies.

As for the lovely girls in this picture, it truly saddens me that either of these two girls or even children in general, start off this way and end up as the very adults I’m speaking of. Whenever I pass a school playground or a day care center, I enjoy noticing the children all playing together. All different races and nationalities; doesn’t matter. Kids are all enjoying a great time and the last thing on their minds is race.

Maybe a lot of us adults, rather than trying to teach these children to jump on one side or the other, should be TAKING NOTES.

This entry was posted in Racism, Uncategorized and tagged adults, Black, color of skin, everyone, minorities, problem, racist, whites and blacks. Bookmark the permalink.

1 Response to #Racism: A Problem WE ALL Need To Work On Fixing