#TRUMP: Here Is Why You Just Lost the Even Remote Chance You Had With African-Americans 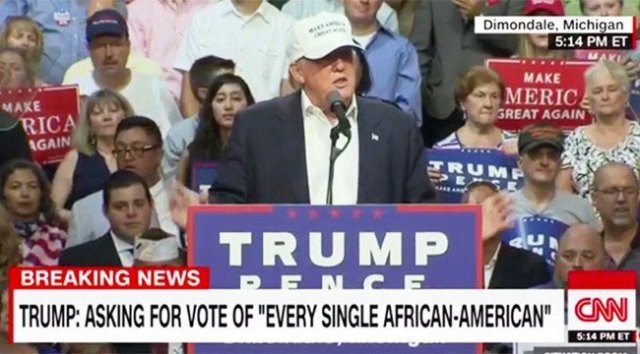 I will start this to say that I am a black man. I will also preface to say that, despite what you and many others will likely assume, I am NOT “pro black.” Not even close. Those who know me know that I have spoken up MANY times about the black community and have often been attacked for it, mainly by members of, you guessed it…the black community. My stance is largely that we need to do better within our own community. We can’t blame white people for anything and everything. We can’t sit here and demand respect from others when we often show that we don’t even respect ourselves. That’s mostly where I am.

I am also not a fan of the “Black Lives Matter” movement, because even that has spiraled out of control.

This is not to say that I am “anti-black,” either. It just means that I don’t have a fist in the air as I’m writing this. But I’ve also been married for 17 years to a woman who happens to be white. So to put it bluntly, much of the black community aren’t exactly fans of mine. Chances are, unless I get shot by a white cop, there won’t be rallies, protests, or riots for me any time soon.

With that being said, here is why I honestly feel you’ve lost even the remote chance you had with securing the African-American vote.

Number one, let’s be clear. I wasn’t planning on voting for you anyway. I’m taking a wild guess that much of the black community was not, either. For me, believe it or not, it wasn’t any racial comments from you that did it, at least not primarily. It was much of what you’ve said about and your treatment toward women.

However, as far as racial comments and behavior are concerned, not being a huge fan of politics, the first time something jumped out at me was when you took the picture at the Mexican restaurant with some kind of Mexican dish in front of you. I had to scratch my head at that one. I thought to myself, You DO realize that there’s more to a Mexican person than food, right? Also, I’m not a fan of Mexican food myself, but that has no bearing on how I feel about people who happen to be Mexican.

I was just waiting for the picture at KFC in front of a bucket of chicken. At least give us equal time.

For starters, that term is just overblown to me anyway and most who use it aren’t using it in the right way. Too many believe that any attempt to be cordial or mindful of what one says is being “politically correct,” which is not the case. But that’s a topic for another day. It’s really not something that wildly matters to me anyway.

My thought was, why not just address this man strictly by name? Unless you’re Stevie Wonder, we would know he was black once the cameras were on him. Not the worst thing in the world and I can always appreciate the effort, but it seemed forced.

So this latest episode in which you are hoping to gain the African-American vote  by saying, “What the hell do you have to lose?” again, I honestly feel that any chance you had, at least with the black community, was just lost.

For one, “What do you have to lose?” implies that a person is in the worst state possible. While some of us are most certainly in a better place than others, I’m not sure I would take the leap and say this much.

Two, this term doesn’t speak to any real “plan.” It basically just says, “Hey, everything else hasn’t worked, so you may as well try me out!”

No one can say what has worked and what hasn’t for this person or that person. So in my opinion, it’s wrong to assume that our community is in the worst shape possible, or at least we are so desperate that we’re willing to “try anything.”

Growing up in Baltimore City, I can understand why you and others would have this mindset. But keep in mind that not every black person out there is in this desperate state and even if they were, again, you haven’t provided anything close to a solid plan as to why you would be a good choice for the black community. That would be like if I were single, went up to a woman and said, “YOU SHOULD DATE ME. ALL YOUR OTHER BOYFRIENDS SUCKED. WHAT THE HELL DO YOU HAVE TO LOSE?” Basically to imply that she should date me strictly because of the state her past boyfriends. Of course, I’m not bothering to tell her of the good qualities I have. That wouldn’t be important with this thought process.

I can be honest. My mother was single when she had four of us and we did not get along very well as I grew up. But one thing I’ve always carried with me is the understanding that I am largely in control of my own life. Never would I rely on the president to just do anything for me.

For the most part, the decisions the president makes are often far removed from what directly affects us as citizens. This is mainly my reason. I also understand that as the president, my issue will not be your only issue. So if I sit around, waiting for you to just “fix” everything, I’ll be in for a disappointment. Especially when much of it, I DO have control of myself.

So again, without anything that resembles ANY kind of plan of what you would like to do for the black community (even though I am not in the least asking for myself), I really don’t see how it’s beneficial for you to take this stance of “What the hell do you have to lose?” This is not Vegas. We’re not gambling with money that isn’t ours. We are considering our next United States president. This really isn’t something we should just “roll the dice” on.

To be frank, I don’t expect you to understand what I’m saying here. I don’t expect my friends who support you to understand, nor agree. The rhetoric will be about the same. All Hillary’s faults will be thrown into my face, along with the classic, “mature” responses of how “stupid” I am because of saying this. Nothing like tantrums from grown adults because they don’t get their way.

There will even be those who will misread all this to believe that I still live in the inner city, own an “Obama phone,” am a deadbeat father and am on welfare. Those people are beyond help.

Our community in many ways, is a mess. I don’t argue that at all. I see it every single day, so there is no one who can tell me otherwise.

However, I will never believe we are in such bad shape that we should be willing to take a blind chance on someone as our president just because.

After all, if “WHAT THE HELL DO YOU HAVE TO LOSE?” is the best a presidential candidate can come up with, then our country as a whole has MUCH bigger problems than even the issues the black community face each day.

This entry was posted in Uncategorized. Bookmark the permalink.