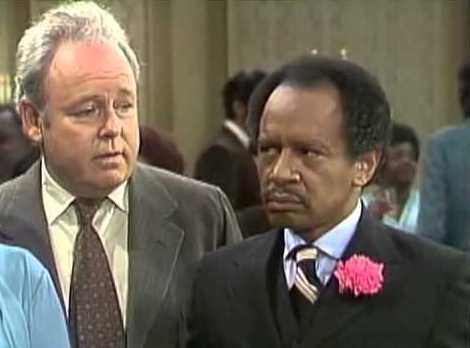 As an aspiring professional screenwriter, I’ve always admired the work of Norman Lear. If the name doesn’t ring a bell, he is the man who was behind the classic shows such as Good Times, One Day at a Time, Maude, The Jeffersons, Sanford and Son, along with a few others, especially the picture shown above, which of course, is from All in the Family.

No matter the age, I haven’t met too many people who have never heard of any of these shows, even if it is just one of them, despite the fact that they took place mainly in the 70s thru the early to mid-80s. That is truly a testament to not only the quality of these amazing shows, but how well they’ve aged.

Speaking of quality, what made these shows as great as they were was not only that quality (along with of course, the actors who brought them to life), but the fact that these shows dealt with SOCIAL and POLITICAL issues of the time. All in the Family and The Jeffersons featured lead characters who were bigots for the most part, Maude featured an episode where Beatrice Arthur (as the lead character of “Maude”) had an abortion, One Day at a Time featured the late and wonderful Bonnie Franklin as a single mother, Good Times featured an entire black family living in poverty, and so on. Speaking of Good Times, ironically, that and The Jeffersons was on the air at the same time. Contrary to Good Times, The Jeffersons featured a wealthy black family which was unheard of throughout society, especially when it came to television.

Much of these issues on television are common nowadays, sure, but back then, they were the first of its kind. Not even twenty years prior were programs like The Dick Van Dyke Show, Leave It To Beaver, I Love Lucy, and more, which focused largely on “traditional” (at the time) families featuring the man of the house who had a career, the woman who was the homemaker, and children. These shows were great also, but when these other shows came along, it definitely shook up the television world.

Being that I was born in 1979, I didn’t catch many of Mr. Lear’s programs at the peak of their successes. Like many others close to my age, I didn’t discover most of these shows until they had already been off the air for some time. Thank goodness for reruns.

We may talk today about how great these shows are, but again, being born at the time I was, I only have secondhand knowledge of how these shows were received during the times they ran. I would have loved to have been alive earlier, around when they started to not only have heard about it, but to have really FELT how society viewed them.

This brings the word “agenda” to mind, which is the point of this blog post.

Today, whenever a social or political issue (as society views it) is presented in some public forum (such as television or elsewhere in the media), the first thing many people like to say is that it is an “agenda” being pushed onto us or being “shoved down our throats.” For example:

Homosexuals kissing on a television drama.

Illegal immigration or support for the refugee crisis.

Transgendered people and bathroom use.

Racial profiling and racism in general.

Some of you are going to want to think of those who riot. There’s a reason I left that off. That doesn’t go with any of this. Many like to group them in with those who protest, but that’s lazy. Rioting and protesting are two entirely different things.

Anyway, even not being alive during the early years of Mr. Lear’s shows, I can imagine that people felt he was “pushing an agenda” as well. Some networks didn’t even want to air a few of them because of the controversy they were afraid it would cause.

Speaking of controversy, another show comes to mind (that Lear was not a part of), titled, Soap, which featured television’s very first openly gay character “Jody,” (played by Billy Crystal) in 1978. I can group that in with the rest of these.

…how are all these topics “agendas”?

It just doesn’t make sense to me. Look outside and in the world. THIS STUFF IS OUT THERE. IT’S HAPPENING. Interracial marriages and relationships, while much more accepted than they once were, are still a problem to some people. Same for the other areas I mentioned.

“Agenda” to me is if this stuff wasn’t going on in our world. BUT IT IS. So I don’t get how this is some “agenda.” The things being discussed are not what people are just making up.

Now, I don’t need to say that there are a lot of people out there who like to pretend this stuff doesn’t happen, I don’t know…because it may make you uncomfortable. It’s not viewed as “normal,” so of course, it rocks the boat. And rather than making an attempt to understand, people just dismiss. It’s like the expression, “People make fun of or put down what they don’t understand.”

I’ve been married to my wife who happens to be white for almost 18 years. Marrying her was not about some “agenda.” It was because I loved her. That’s not something that should need to be explained, but there are people on either side who thinks there was some ulterior motive behind it. Some of the reasons are just ridiculous, and my wife and I both have heard this stuff.

In reference to homosexuality, a lot of celebrities are coming out as gay. The response this is often met with is, “Why is this news?! Why should we care?!”

My answer is simple. Because of that response and the tone. People don’t seem to understand that the fact that homosexuality is still not widely accepted is what makes people coming out to be “news.” Not to mention, how many other people out would like to come out, but are too afraid to do so, mainly because of the backlash they would receive? People announcing that they are homosexuals is important because it may give some bravery to those who have been keeping quiet about it. You may call it an “agenda,” but again…it’s LIFE.

Same for when women are sexually assaulted. A LOT of women are living with keeping the secret of having been raped or sexually assaulted in some way. However, the minute a woman comes forward, it is often followed by a group of other women who do the same.

People don’t understand why this is, but it makes perfect sense to me. Again…it’s about bravery. One woman speaking up helps the other women have the courage to do the same.

Racism or racial inequality? Totally made up. We as blacks are “exaggerating” that one too, right? As people roll their eyes every time it’s mentioned, but don’t have the good sense to actually KNOW what they’re rolling their eyes to without stereotyping and assuming. Enough said.

Those examples, like with so much else, again, is considered nothing more than “agendas” by a lot of people, because of how uncomfortable it makes them to talk about.

Well, poor you. You don’t like to hear or to talk about them? Imagine how it makes the people who ACTUALLY EXPERIENCE IT to feel.

Before any of you say for anyone to “get over it,” just FYI, but that doesn’t work anymore. Have a seat.

My point is, anything that involves something or someone other than a straight, white male is NOT an “agenda.” It’s called LIFE. It’s the world we live in. It’s what’s going on in our country. Why should all that be kept aside or hidden?

I know, I know. Awards shows, right? Why do celebrities talk about politics? I’m there to watch them entertain us.

Right. It’s mainly because the particular stance is what you don’t agree with. Not that they are talking politics. The whole “they shouldn’t talk politics” is just what you think is a clever way of dismissing them, which doesn’t work, either. End of story.

I don’t know for certain what went through Mr. Lear’s mind when he came up with the ideas for these shows or why he decided to buck the system and create shows that didn’t follow the traditional television show model. I also can’t imagine what he felt as he received the backlash he did from the public or even the networks once these shows saw the light of day.

But I do know this much. Normal Lear felt a need to tell stories, and not just purely fictional or traditional. He wanted to tell stories of LIFE and where we were at that time. Sure, people were comfortable with the black and white family shows or even the wildly fantasy shows such as The Munsters, Addams Family, etc. (so unrealistic that it didn’t cause a lot of discomfort to many), but to show people that THIS IS LIFE and to force them out of their comfort zones to say, “Yes, you’re watching television to escape life, but guess what? You can’t always escape it. THESE stories deserve to be told also” was something that was unheard of back then.

I get the feeling that when we sit down to be entertained, many of us don’t like to do a lot of thinking. But maybe Mr. Lear wanted to give us more credit than that. Maybe he wanted to entertain while ALSO telling stories he wanted to tell and thought we as a society were ready to hear about and see on screen. Or that we NEEDED to hear and see them.

Every era has stories that need to be told. And every era will have people who are uncomfortable with those stories because of the bubble you’ve placed yourself in and have gotten relaxed with remaining in. But just because you aren’t comfortable doesn’t make those stories “agendas.”

And guess what? You DO have the option to turn your televisions off, log off social media, or otherwise continue to bury your heads in the sand if you choose. Free country and all that, right?

But just because you want to do that doesn’t mean that LIFE around you will stop. And it doesn’t mean that these stories won’t be told. Those who buried their heads in the sand back when these shows aired did NOT stop them from being told, correct?

Sure, Norman Lear is a genius…now. But would you have said and thought the same thing back then? Especially if you’re one of those who is uncomfortable seeing all these “agendas” being “shoved down our throats”?

And you can call them anything you would like to make yourselves feel more comfortable. But one thing they are NOT is “agendas.”

It’s going on with or without you.