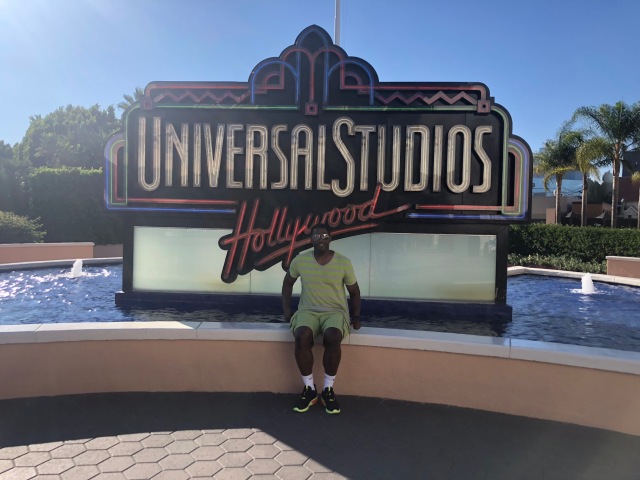 My girlfriend, Nellie, and I spent the day at Universal Studios in Hollywood as part of our very first trip (for either of us) to California. I’d actually be lying to say that I have never been to Cali before, but when I was in the Army, I came in 1998 for training at Fort Irwin and never left the base. I certainly wouldn’t call that a “trip” to California; at least as many would think of it. Besides, when one thinks of coming here or when California comes to mind, surely people don’t turn down opportunities to speak about the Hollywood Walk of Fame, getting autographs from celebrities, Disneyland, L.A. and everything else in favor of talking about military training. At least not unless you’re some super old retired military folks, in which case…oh, wait a minute. That would be me. Never mind. Moving on.

Anyway, we had an AMAZING time to say the least. We really enjoyed ourselves.

What really spoke to me though, was the bus tour through the different studios. We got to see all the sets they use there and we even went through certain areas as they were filming inside (of course we didn’t actually see any of it). For those of you who have been there, you know the tour also includes some other fun, interactive stuff as well, such as King Kong, Jurassic Park and elements of the Fast and the Furious series.

However, what spoke to me most actually wasn’t any of that. It was seeing all the posters and pictures of the classic movies. Even movies that are more current, but left a lasting impression really grabbed my attention, almost to the point that Nellie thought for a little bit that I wasn’t enjoying myself.

I most certainly was. I was just in awe of everything and had a different kind of focus in mind.

As a screenwriter, my dream is to create work that will leave that kind of lasting impression on the world. Every brilliant movie starts with a single thought, which in turn becomes written work. And of course, you know the rest.

I saw posters such as Jaws, Jurassic Park, E.T., Dracula, Frankenstein, and Back to the Future, just to name a few. These movies have stood or will stand the test of time. Many have aged remarkably well. You just name some of these movies and nearly anyone you would meet would go, “Oh yeah.”

Let me write that again: Nearly anyone you would meet.

If you aren’t a writer or someone who supports us at least, then I don’t expect that you would get what exactly that would mean to me. That’s okay. That is my reason for writing this. I want to share just how inspirational it was for me to see those.

I do not want to write a movie/television program just to be doing it. I don’t want to “just” make it or “get by.” I want to write something that people absolutely cannot and WILL NOT FORGET. It is that simple. I want to be able to create something that will not only allow people to escape their lives for a brief moment and go some place magical, but I also want to leave that lasting impression that will place me right there among many of the greatest movies of all time.

AMONG MANY OF THE GREATEST MOVIES OF ALL TIME.

There is a stick-in-the-butt screenwriter with a couple of produced works reading this right now and either rolling his or her eyes, thinking about how crazy I am to be saying this or, how “typical” it is for screenwriters to think this way. You may be even thinking that I am totally ignorant on the process of screenwriting, how things go from there to production, how long it takes, the odds of success, blah blah blah. If that is you, here is a piece of advice, whether you want it or not…

Unless YOU are the person in charge of approving or rejecting my work, keep all that nonsense to yourself. I don’t want to hear what all you’ve come up with based on what everyone else did.

I am not everyone else.

Besides, what is the harm in something like this being an inspiration? Why in the world would I choose to be a screenwriter and not at least aspire to produce the best work possible? Who would dare choose to go into this profession half-assed? How confident would other people be in me if I don’t even exhibit that same amount, or more, of confidence in myself?

Sure I could do all this just to get a foot in the door and be satisfied with that. But Nellie tells me all the time to THINK BIG. DREAM BIG. So why would I NOT look at the classics? The movies that have multiple sequels that have all turned out to still be pretty good? A series like Harry Potter? Why would I choose to go to a place where I’m only looking to “get by”? Why not look at those with confidence and say, “YES. I CAN AND WILL.”

The hell with just “getting a foot in the door.”

I want to put on steel-toed boots, take a few steps back, run, and dropkick it off the damn hinges.

Just like the writers of the movies I mentioned above have done.

Otherwise, I might as well just close my laptop right now.

2 Responses to #Screenwriting: My Inspirational Trip To Universal Studios Hollywood