#RavensFlock: Here Is Why You Look Silly Hating On Lamar Jackson 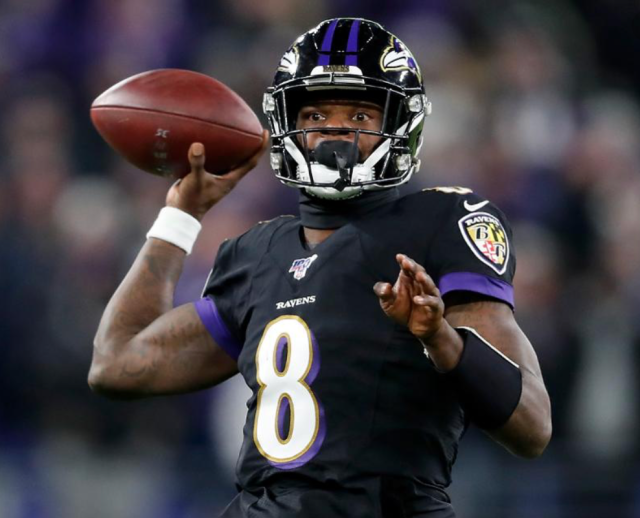 Nintendo has a video game series by the name of Mario Kart. You may have heard of it. If you have not, it is simply a go-kart racing series with a collection of Mario characters (both good and bad guys) competing with each other. Not only do they race, but there are all kinds of power-ups and weapons that the players can use against each other.

I have played three versions of Mario Kart, with the most recent being Mario Kart 8 on the WiiU. Several version into the series, there came an item that is identified as the blue shell. It looks like, of course, a blue shell with small spikes and wings.

Each item in Mario Kart serves a specific purpose for the players. For example, if a player obtains a green shell, this is fired and travels straight ahead, bouncing off walls until it hits another player (or the same one who fired it), or rolls off a cliff. A red shell serves as a “heat-seeker,” as it follows and attacks the person in the position ahead of the player who fired it. And so on.

The blue shell serves one purpose as well: To go after the player in first place.

With just about all of the other items, there are ways to defend yourself against players behind you who fire these items your way. For example, if someone fires the red shell and the player ahead of them has a green shell, they can simply throw that green shell behind them upon receiving the warning that the red shell is coming, and that red shell is blocked and destroyed without causing damage to the player.

However, the blue shell is one of the few items in the game that is nearly unavoidable. There are very few ways to defend yourself against it, but in the heat of the action, it takes a lot of luck to be in the position to combat it.

With the blue shell, it flies, so there are no a lot of ways to use other items to destroy it, since most of the other items are ground items. So all the player has to do is fire it and it does the rest of the work.

After playing several times and learning about this item, I began to give it what I feel is the most appropriate name: The Hater shell.

Now, whenever my family and I play, we say “Hater shell coming” without even missing a beat. None of us even call it the “blue shell” anymore. I actually don’t know if we ever did.

Upon firing the hater shell, there is no guarantee that even upon hitting the person in first place, that that person will drop out of the top position. There is also no guarantee that the person who fired the shell at them will immediately improve their position. But it is still a fun item to have. Not to toot my own horn, but since I am usually among the top spots each time playing within my household, I rarely get this item myself. It is most commonly gained by the players occupying the lower half of the positions.

So in a nut”shell” (tee hee), the hater shell is found most often by the players who are performing the poorest in that particular race and meant to attack the one who is doing the best. There is also no strategy on attacking the one in first place. The player could be facing the opposite direction and the hater shell will do its thing.

Now what in the world does all this have to do with Lamar Jackson?

A lot of fans have been throwing “hater shells” at Lamar. Of course, by now we now that the Ravens were defeated in the divisional round by the Tennessee Titans. The bottom line is that they came to play that day. The Ravens didn’t. Period.

I am a Ravens fan. Our team went 14-2 to secure the best record in the regular season. I’m aware that means nothing when they are now out of the playoffs. Of course, when your team does well and others do not, they throw those hater shells.

Unless you have been living under a rock as a football fan, you’ve heard a lot about Lamar Jackson and the Ravens this season. Even those who had not followed football much began doing so just to see the deal with Jackson. My mother of all people began calling me this year, when she normally doesn’t watch. So he was waking quite a few people up, not to mention the entire league.

But what I find interesting about us losing in the playoffs is this. The fans doing the most talking are not from the teams who are still in it or even made the playoffs. The ones yapping the most are fans of teams who never even got in.

So to recap. Best team in the regular season. And fans of the teams who are near the back or did not make the playoffs are doing the most talking. The Ravens being out of the playoffs doesn’t mean your team is actually any better or that Ravens are any worse. But anything you can throw at them to make it look as though your team might have a chance to catch up or to slow the Ravens down.

Let me tell you why throwing these “hater shells” at Lamar make you look silly:

Um…how many years has he been in the league and lost in the playoffs? Ten? Five? No…two. And last year, he was thrust into the position because of an injury to Joe Flacco. He was very wet behind the ears, so while it was exciting to watch, I don’t think any Ravens fan was punching tickets to the Super Bowl. Jackson was still viewed as the “backup” at that time because Flacco was still in the building, even though it was clear that Joe’s days were over with us. But we remember how rough Lamar’s first playoff start was. I’m sure he would like to forget.

However, even though another loss happened this year, there is marked improvement in Jackson’s game, even during that loss. His numbers were nowhere near where they were last season. “Choking” is usually reserved for those whose games really do not evolve much from one year’s loss to the next. Not a second-year player who has drastically improved. Last year’s playoffs would see Jackson complete only three passes in three quarters. However, this season, despite the loss, Jackson became the first player in NFL history to throw for 300+ yards and run for 100+ in the same game. Yes, you can say, “Eh, but they lost.” But to say that he “chokes” is a little premature. Especially when you’re a fan of a team that notoriously chokes year after year and not sniffing anything close to a Super Bowl in a quarter-century after being once hailed as “America’s Team.” But I won’t mention any team names. I’m a gentleman like that.

Hater Shell #2: Jackson was shut down.

Someone on a Ravens-Steelers group that I run on Facebook said this one. Really? 31 for 59 for 365 yards and 143 yards rushing is “shut down”? Again, the first QB to throw for 300+ and run for 100+ in the same game? Yes, I get that we lost. But how is that “shut down”? 365 for a quarterback is a good game. 143 yards rushing for some teams is considered a good day. But this is “shut down”? Tennessee might have figured this or that out, but he still got his yards. Our loss came from other players leaving plays on the field. If a catch happened here or there, the outcome might have been much different. Not to mention he had three turnovers, which would hurt any team. Mistakes like that cannot happen. But if we are looking strictly at Jackson and his production, he was far from “shut down.”

Then again, I did say that someone in the “Ravens-Steelers” group. Pittsburgh has missed the playoffs the last two seasons. Have a seat.

Lamar Jackson surpassed 3,000 yards and threw for a league-best 36 touchdowns with only 6 interceptions. Throwing for more touchdowns than anyone else does not guarantee a Super Bowl, but I’m more than certain that no less than half the quarterbacks would love to trade their numbers for Jackson’s. Jackson loves to run, but it’s almost as though folks don’t want to acknowledge that he actually can throw when he needs to. You see a mobile QB and it just baffles you that he can throw it as well. There is always room for improvement, but before you start the blanket comparisons to Michael Vick and Cam Newton, he isn’t any of those guys. You see a quarterback who can run and right away, there’s no way he can throw. If that first tipped interception doesn’t happen, it’s not even certain if we are even talking about this right now.

The bottom line is this: Those of you running your mouths about Jackson and the Ravens would trade away half your teams if it meant you would end up with Jackson. I spent this time writing these statistics on here, but there was almost no need to do so. Haters don’t really care about all the facts, and the NFL is no different. Your teams couldn’t get it done, so you immediately go after all those who outperformed yours. No strategy. Just petty jabs.

Keep on throwing them.

Because that means you are the one who needs to play catchup.